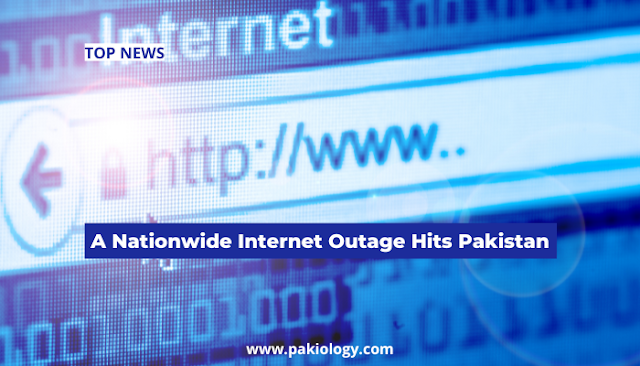 A major internet outage hit Pakistan on Friday at 7:00 PM (29th November 2022), leaving the nation without any access to broadband or wireless data services in what seems to be an unprecedented event for the country. As per local reports, the outage was caused by fiber-optic cable damage between the cities of Abu Talab and Zafrana in Egypt have been reported. All of Pakistan’s major telecom operators have confirmed the outage and are working on fixing it as soon as possible.

Details indicate that the Internet outage in Pakistan began at 07:00 PM. Major Internet Service Providers such as (Pakistan Telecommunication Limited) PTCL, Stormfiber, backed by Cybernet, and Ufone were all affected.

An internet outage has been reported in Pakistan and it began at 7:00 PM PKT this has caused either slow or no browsing at all, the ISPs are yet to explain what’s going on.

Major media channels in Pakistan did not report on the outage, which has a direct impact on the banking system. At 10:00 a.m., Zong, and Mobilink Jazz were again operating, but PTCL, Stormfiber, Nayatel, and other companies can still not provide Internet service.

PTCL, Nayatel, and Stormfiber helpline numbers are completely down. Only Zong, and Mobilink Jazz is functioning properly for now, and other services are affected by the nationwide outage.

Pakistan Telecommunication Authority updates social media  The PTCL reports that internet connectivity issues are being caused by trouble in the data networks between the South and North. This problem is being investigated. As further updates are available, PTA will share them with you.

Dual cut in the terrestrial segment of SEAMEWE-5 between the cities of Abu Talab and Zafrana in Egypt have been reported. Alternate arrangements to provide uninterrupted #internet services to the users have been made.
Work is underway to remove the fault.

After deliberation, the restoration of all services will be a priority and our best engineers are already hard at work. Pakistan Telecommunication Authority.

The Effects of an Internet Shutdown

Is There A Way To Get Around It?

No internet can be a pain, especially when you rely on it for work or school. Luckily, there are a few things you can do to stay connected. If you have Wi-Fi access, then try turning your phone into a hotspot so that other devices can connect to the internet through your device. Alternatively, go ahead and text friends and family who might not be affected by the outage so that they can relay messages back and forth with you.

Let us know if you have been experiencing an internet outage in your area, in the comments.