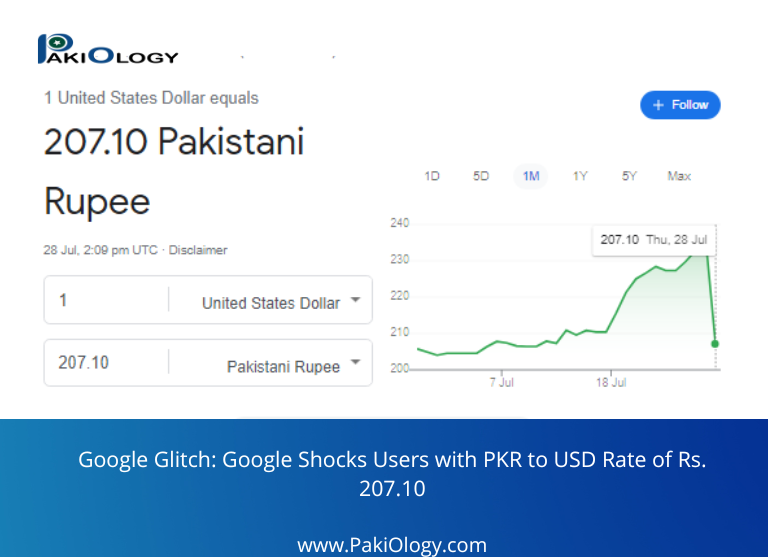 Google has once again shocked users by showing the incorrect exchange rate in their search engine results. Earlier, Google confused its users when it showed the PKR to USD rate at Rs 207.10 instead of the actual rate of Rs 239.94 at the time.

Google made a mistake and said that one US Dollar is worth 207.10 Pakistani Rupee on 28 July 2022 at 08:40 PM (Pakistan Time). The local currency still has not recovered and this is a fault on Google’s end that displays an incorrect exchange rate.

How long did the glitch last?

On 28 July 2022 (Thursday), Pakistan Rupee (PKR) closed at a record low of Rs. 239.94 against the US Dollar (USD) in the interbank market after trading as high as Rs.245.01 the greenback crossed the opening market rate of Rs. 240 during intraday trading.

What caused this error?

On Thursday, a Google glitch showed the Pakistani Rupee (PKR) to US Dollar (USD) rate at Rs. 207.10. The error caused quite a stir among users, with many taking to social media to voice their confusion and shock. While it’s still unclear what caused the error, some speculate that it may have been due to a technical glitch or human error. Whatever the case, it’s certainly an embarrassing moment for Google.

As of the most recent reporting, the Pakistani Rupee has plummeted nearly 8% against the US Dollar in just one week and has fallen below $10 billion. Meanwhile, inflation has hit its highest level in over a decade. This glitch on Google, which displayed the current Pakistani Rupee to US Dollar rate as Rs. 207.10, left people confused.

Read: A Career in Cyber Security: Your Guide to Exploring Different Options

A word on currency exchange rates in Pakistan

Currency exchange rates in Pakistan are determined by the interbank market. The interbank market is where banks and other financial institutions trade currencies with one another. The rates you see on Google and other currency conversion sites are based on the rates that these institutions are trading at. These rates can be significantly different from the official rate set by the State Bank of Pakistan.