These are MDCAT MCQs in the Biology chapter of Cell Structure and function. These are very important MCQs for the preparation of PMC MDCAT. Attempt it online for free. 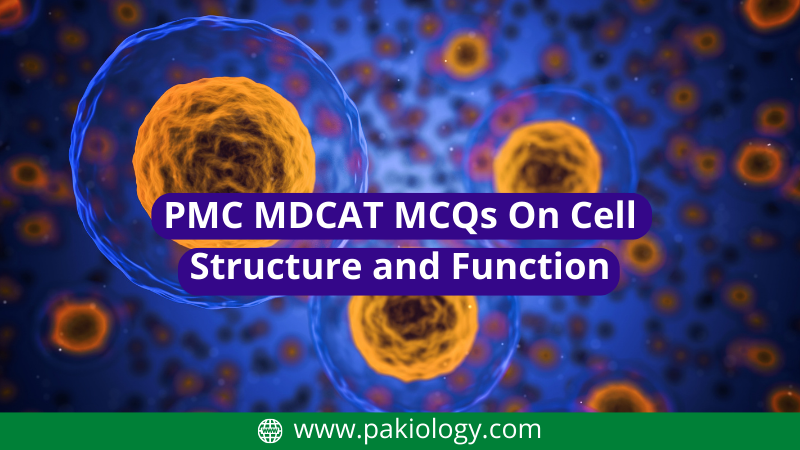 MCQs On Cell Structure and Function

Your body contains trillions of cells that all have specific functions and jobs to perform, making the human body a complex organism. But how do cells work? How are they structured? And what do they do? You’ll find the answers to these questions and more in this guide on cell structure and function. Here’s what you need to know about your body’s cells!

Inside a cell, there is a nucleus. Inside of this nucleus are chromosomes with genes on them. The nucleus directs the operation of all parts of the cell in conjunction with other organelles like mitochondria.

The membrane inside a cell is another important part to consider. It surrounds everything inside the cell, including cytoplasm, and acts as a barrier between inside and outside areas of that specific cell. The membrane also keeps individual cells together while separating them from other cells.

1. What is the nucleolus?

The nucleolus is a small organelle located inside the nucleus of eukaryotic cells. It is where ribosome biogenesis occurs. Ribosomes are responsible for protein synthesis and are composed of RNA and proteins. The nucleolus is involved in regulating gene expression and controlling cell division.

2. How does the nucleolus function?

The nucleolus presents a unique structure that can regulate the production of ribosomal components. It contains three distinct regions: the fibrillar centre (FC), dense fibrillar component (DFC), and granular component (GC). These regions are separated by membranes and have different roles in regulating ribosome biogenesis.

3. Where do ribosomes come from?

Ribosomes are produced in the cytoplasm and then transported to the nucleolus. To produce ribosomes, the nucleolus must first transcribe the rDNA genes. Once these genes are transcribed, they are processed and assembled into pre-ribosomal particles. These pre-ribosomal complexes are then exported out of the nucleus and enter the cytoplasm. There, they are further modified and packaged into mature ribosomes.

4. Why is the nucleolus important?

The nucleolus serves many functions including the production of ribosomes. It is also responsible for producing factors necessary for DNA replication and repair. It is also involved in the regulation of cell cycle progression.

5. What happens if the nucleolus isn’t functioning properly?

The Golgi apparatus is one of three types of ‘docking stations’ for proteins. It sorts and modifies molecules before they leave the cell. Proteins are moved from the endoplasmic reticulum to the Golgi, where sugar molecules are added as a signal for other parts of the cell to know where to find them.

The membrane that separates the cytoplasm from the outside world is called a plasma membrane. The cell’s internal environment is made up of water, ions, proteins, amino acids, organic molecules, nucleic acids, carbohydrate molecules and other types of nutrients. It surrounds all other organelles in every cell of your body.

If you are reading this blog post on your phone or computer screen right now it’s because you’re using light energy.

A microfilament is an actin filament found in animal cells. These filaments work as muscles by using energy created by ATP. Microtubules, which are also called protofilaments, are found in plant cells and they work like cytoplasmic tracks on highways.

The endoplasmic reticulum (ER) is a membrane-bound organelle responsible for protein synthesis and folding in eukaryotic cells. ER is the largest intracellular organelle and contains many different sub-compartments known as cisternae.

Cisternal space is the area between two adjacent membranes of the ER. It is where ribosomes synthesize proteins and fold them before they are transported out of the ER.

A smooth endoplasmic reticle (SER) is the innermost layer of the ER and is composed of smooth vesicles. SER is connected to the Golgi apparatus.

MCQs On Cell Structure and Function

Here are the MCQs from the PMC MDCAT on Cell Structure and Function.