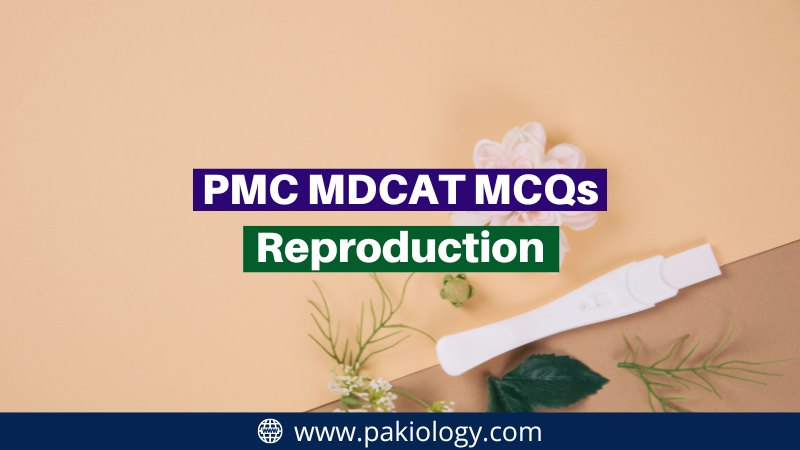 Want to prepare yourself before you take the PMC MDCAT? Trying to get used to the type of questions that will be on the exam? Take this set of Reproduction MCQs from PMC MDCAT to test your knowledge and build confidence. If you feel confident, go back and retake this set! See if you can do better than the first time around, or at least reinforce what you already know about Reproduction MCQs from PMC MDCAT. The male reproductive system is made up of the penis and two testes. Inside the testes, sperm cells are created in a process called spermatogenesis. The sperm then passes through tubes called the vas deferens, where they mix with seminal fluid to form sem en. The two structures that make up the male reproductive system are collectively known as the genitourinary system.

The female reproductive system is made up of the vag ina, uterus, fallopian tubes and ovaries. The uterus is a hollow, pear-shaped organ in which a developing fetus grows. The vag ina connects the uterus to the outside of the body. It also serves as a conduit for menstrual flow from the uterus. The fallopian tubes are two slender tubes that lead from each ovary to one side of the uterus.

The process of reproduction starts with a sperm cell from the male and an egg from the female, which then combine to create a zygote. This is the first stage of reproduction. The next stage involves the growth of this zygote into an embryo, during which it will develop into a fetus and fully mature. Finally, birth takes place when the baby emerges from its mother’s body through her vag ina.

In sexual reproduction, the two haploid cells come together to form a new diploid cell. One of these cells is called the female gamete, which is also called an egg cell or oocyte. The other cell is called the male gamete, or sperm. The sperm carries 23 chromosomes while the egg has 22 chromosomes, with one chromosome coming from either parent.

Fertilisation is the process in which a sperm cell and an ovum (egg) come together to form a zygote. The zygote then develops into an embryo, which may or may not implant in the uterus. In mammals, implantation usually occurs about 7 days after fertilisation. This is called pregnancy.

Here are the MCQs from the PMC MDCAT on Reproduction.