Essay on Inflation in Pakistan for Students 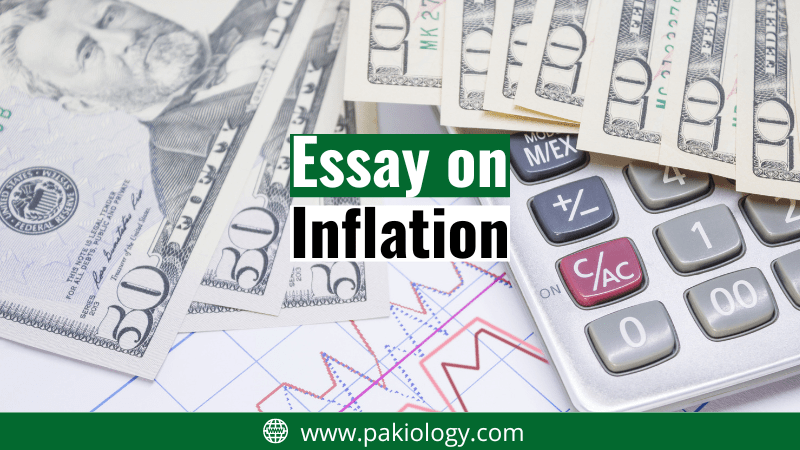 In this essay on inflation in Pakistan, we will look at the causes, effects, and solutions to this issue that has been affecting the country for decades. The term ‘inflation’ refers to a sustained rise in the prices of goods and services in an economy. In Pakistan, inflation has been a major concern since the late 1990s, with the Consumer Price Index (CPI) reaching a peak in 2023. We will explore the various factors that have contributed to inflation in Pakistan, its economic effects, and what can be done to address the issue.

Causes of Inflation in Pakistan

Inflation in Pakistan is caused by several factors, which can be divided into two main categories: domestic and external. The main domestic causes of inflation are an increase in money supply, an increase in government spending, an increase in indirect taxes, and a decrease in economic growth.

In addition, higher government spending can lead to inflation. This occurs when the government prints more money to finance its expenditure or borrows from the public and transfers the cost of this additional spending to businesses and consumers. This leads to higher prices for goods and services.
Indirect taxes are another major factor that contributes to inflation in Pakistan. When indirect taxes are increased, prices of goods and services also increase, leading to an overall rise in prices.

Finally, low economic growth can also cause inflation in Pakistan. A weak economy reduces people’s purchasing power, forcing them to buy less, which reduces demand and leads to lower prices. However, when economic growth stalls, businesses are unable to sell their products at the same price as before, leading to a rise in prices.

Overall, inflation in Pakistan is caused by a combination of domestic and external factors. These include an increase in money supply, higher government spending, increases in indirect taxes, and a decrease in economic growth.

The effects of inflation on the economy can be both positive and negative. Inflation erodes the purchasing power of money, meaning that each unit of currency is worth less than it was before. This means that, as the cost of living increases, people can purchase fewer goods and services for the same amount of money. As a result, their standard of living decreases.

Inflation also reduces the real return on investments and savings, which can have a detrimental effect on economic growth. When inflation is high, people prefer to save their money rather than invest in a business or other activities. This reduces the availability of capital and results in slower economic growth.

In addition to decreasing standards of living, inflation can lead to unemployment if companies are not able to increase wages at the same rate as prices rise. This can lead to an increase in poverty, as people struggle to afford necessities. Furthermore, when prices rise faster than wages, it puts pressure on government budgets and can increase public debt.

Inflation can also cause the value of the local currency to depreciate against foreign currencies. This has a direct impact on the cost of imports and makes domestic goods less competitive in international markets. It can also have an indirect impact on exports, as it reduces the competitiveness of local producers in foreign markets.

Inflation is a serious issue in Pakistan, and it needs to be addressed to improve the country’s economic conditions. The following are some of the measures that can be taken to control inflation in Pakistan:

1. Fiscal policy: A strong fiscal policy is necessary for controlling inflation. The government should increase its revenue by implementing taxes on the wealthy and reducing public spending. This will help reduce budget deficits, which will result in lower inflation.

2. Monetary policy: The State Bank of Pakistan should adopt a tighter monetary policy to control inflation. It should raise interest rates so that investors have an incentive to save rather than spend, thus curbing demand-pull inflation.

3. Supply-side measures: There should be an increase in the production of essential commodities and products to meet the demand of consumers. This will help reduce prices and inflation in the long run.

4. Subsidies: The government should provide subsidies to those who are suffering due to the high prices of essential items. This will help them cope with the rising cost of living and ensure that they have access to essential goods and services.

5. Stabilizing exchange rate: A stable exchange rate between foreign currencies and the rupee is necessary for controlling inflation. The State Bank of Pakistan should strive to keep the rupee’s value stable by using currency swaps and other methods.

These measures can go a long way in controlling inflation in Pakistan. By taking these measures, the government can help improve the country’s economic condition and create an environment conducive to investment and growth.

What is inflation in simple words?

Inflation is a sustained increase in the general price level of goods and services in an economy over a period of time.

What are the 4 main causes of inflation?

What are the 5 main causes of inflation?

What is inflation introduction?

Inflation is a phenomenon that has been observed throughout history. It refers to the sustained increase in the general price level of goods and services in an economy over a period of time.