In a breakthrough achievement for artificial intelligence (AI), the advanced language model ChatGPT has successfully passed the United States Medical Licensing Exam (USMLE). The USMLE is a rigorous exam that tests the knowledge and skills of medical students and graduates and is required for licensure to practice medicine in the United States.

ChatGPT, a recently released AI with the uncanny ability to mimic human writing, has passed some of America’s most challenging professional exams, studies have shown, raising concerns it could soon put many white-collar workers out of a job. The artificially intelligent content creator, whose name is short for ‘Chat Generative Pre-trained Transformer,’ was released two months ago by OpenAI and has since taken the world by storm.

The news of ChatGPT’s success has shocked the medical community, as it demonstrates the capabilities of AI in the field of medicine. The exam, which is known for its difficulty and high failure rate, covers a wide range of medical knowledge and requires test-takers to apply their knowledge to real-life scenarios. 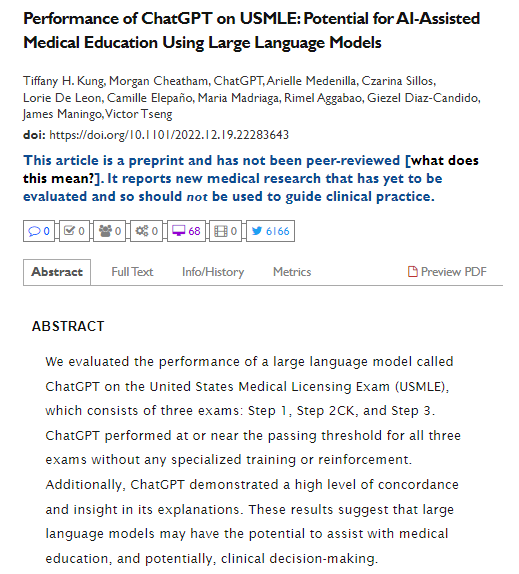 ChatGPT’s achievement is a testament to the advancements in AI and its ability to understand and process complex medical information. The language model was trained on a vast amount of medical data, allowing it to understand and answer questions on a wide range of medical topics.

Praised by figures such as Elon Musk, one of OpenAI’s founders, the AI-powered chatbot has raised alarms regarding ethics as students use it to cheat on writing assignments and experts warn it could have lasting effects on the US economy.

Its results, though, are inarguable – with recent research showing it could successfully achieve an MBA, and soon pass notoriously difficult tests like the United States Medical Licensing Exam and the Bar Exam.

Ethan Mollick, associate professor at Wharton School of the University of Pennsylvania, highlighted these reports in a recent post on social media, one of which was carried out by one of his colleagues at the prestigious school. The report, by Wharton Professor Christian Terwiesch, found that ChatGPT, while still in its infancy, received a grade varying from a B to B- on the final exam of a typical MBA core course.

Additionally, the research, done to see what the release of the AI tool could mean for MBA programs, found that ChatGPT also ‘performed well in the preparation of legal documents.”The next generation of this technology might even be able to pass the bar exam,’ the report notes.

Mollick, who requires students to use AI during his courses covering innovation and entrepreneurship, touted the findings in a post on social media, in which he remarked on their potential implications. ‘I think we haven’t fully absorbed the fact that careful academic papers have found ChatGPT passes some of the most challenging American professional exams,’ Mollick wrote.

The post saw the professor share another study carried out by researchers at Yale that saw the chatbot earn a passing grade on the United States Medical Licensing Exam. Another praised the AI bot’s performances on the professional license exam, commonly referred to as ‘the Bar Exam’, which professors at the Michigan State and Chicago Kent colleges of law found could also be conquered by ChatGPT.

Other posts from the professor similarly tout the progress recently seen from the still-young AI, which early adopters have already begun using to draft assignments and write work emails, all in specific tones and styles.

While ‘still in its infancy,’ as billionaire crypto enthusiast Mark Cuban said in an interview touting the technology this week, the accomplishments of ChatGPT in the few months since its release cannot be ignored.

Andrew Karolyi, dean of Cornell University’s SC Johnson College of Business, told the Financial Times this week that while many may have their reservations over the technology, which has become a burgeoning internet fad in recent weeks, he believes ChatGPT is here to stay. ‘One thing we all know for sure is that ChatGPT is not going away. If anything, these AI techniques will continue to get better and better. Faculty and university administrators need to invest to educate themselves.’

As the technology gains popularity, it has reportedly raised alarms within companies like Google, which has sought to adopt AI to enhance the capabilities of its popular search engine. Late last week, The New York Times reported that Google execs are engaged in plans to ‘demonstrate a version of its search engine with chatbot features this year’ and unveil more than 20 projects powered by artificial intelligence.